Godzilla vs. the Shangri-Las
Blasting Stereotypes from Here to Tokyo

While music columnist David Reitzes is on vacation, his parents' dog Candy Kisses will be filling in. A Chinese Shar-Pei, Candy considers herself fully capable of filling David's shoes. "I don't know diddly about music, and can't write my way out of a bag of Purina," says Candy. "Where's my check?" 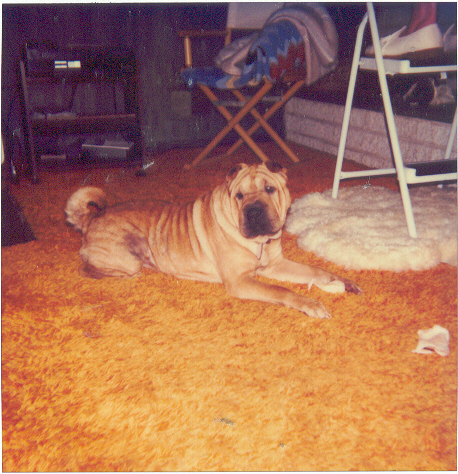 The critic as a young bitch

So what's the deal with the Japanese? Don't they know the kind of stereotypes they're up against? Lord knows if they aren't a horde of poorly dubbed, nuke-addled refugees from Monster Island, they're bound to be a bunch of sexually submissive class brains wrecking the bell curve for the rest of us.

Believe me, I know a thing or two about stereotypes: I'm Chinese-American myself. The family wonders why I'm always barking at other dogs. I'll tell you why. Because I'm sick of little Angus strolling over from next door, yapping, "Aye, lassie, ye'll be dane me lahn-dray noo, will ye?"

How Disney-esque. Listen, Plaid Boy, one more burr out of you and you'll be playing the bagpipes out the wrong end of your kilt, you got me? "Ancient Chinese secret" this!

Jezz, their name alone. Some of you two-legged types seem to consider Shar-Peis less than the epitome of canine elegance, but pugs are the butt ugliest dogs of all.

Here's a fur-instance. (Somebody stop me!) The album kicks off with "Mari in Love," its intro and coda noisily mocking American patriotic music -- with a bugle sample of "Reveille" thrown in -- sandwiching a tune that's essentially a sarcastic surf instrumental but for a brief vocal chorus that recalls in equal measure the B-52s and Yoko Ono. Just who's making fun of whom here?

Sounds like a manifesto to these dog ears. I'm going to make an only slightly educated guess that this group is both flaunting and flouting stereotypes in the time-honored rock tradition. Rather than, say, Debbie Harry toying with the role of bubblegum girl singer, we have a bunch of Asian chicks milking the I'm-with-Gamera shtick for all it's worth. (Man, this is cake. Tell Christgau I'm gonna kick his ass. You think I can score a cheap secondhand typewriter when the Voice goes out of business?)

Musically speaking, eclecticism is the rule here. "Divine" is anchored by Pixies-ish power chords, while we also get detours through gooey female alternapop, some heavy metal mambo ("Bullpen") and '60s kitsch ("Pop Corn"), a geeky metallic cover of "Tequila," and as a hidden track, a warped drum-and-bass number (strangely light on bass -- drum-and-treble?).

Casual Tonalities has also issued a worthwhile compilation, appropriately entitled Nothing in Common, without a single band -- Pugs aside -- you or I ever heard of -- but don't hold that against them.

Eenie Meenie's "Someday" is a beguiling alternapop-disco hybrid with a cotton-candy femme vocal of the guilty pleasure variety.

Mr. Henry's "Harmony Rocket" is a catchy bit of country alternarock that benefits from some "I Want You (She's So Heavy)" tempo changes.

Guadaloop's vocalist sounds like a less gimmicky, countryish Gwen Stefani, and their "Road Map" is a fine rock ballad.

Velvet Dogs are no more original than their name (arf!), but "If This Is Hate" is a surprisingly good Nirvana-esque rocker.

Jeff's "Hope" sounds a great deal like vintage Dinosaur, Jr. or Lemonheads, which, yes, is intended as a compliment.

Action Plus contribute the spooky "Sweetness," which suggests Portishead without the turntables -- acid lounge?

There are eight other bands -- but filler? Just about zippo.

While I've got the bully pulpit, I just want to express my appreciation of those rockin' Spice Girls we're all so rightfully gaga over. I just wish someone would read me their new book, Girl Power! I am especially proud of little Emma, my favorite Spice Girl, but not, I suspect, Dave's), from whom I did manage to catch one valuable tidbit: "I don't want to be a cutie; I want to be a hot, sexy bitch."

Girl, from one hot, sexy bitch to another: You go.

Back to the Reitzes Page