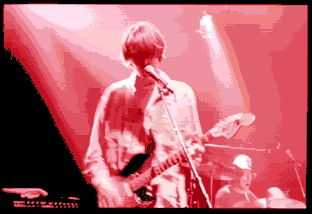 An Indie Sensation Begins to Live up to Its Hype

Steven Malkmus is singer, guitarist and primary songwriter for Pavement, and he's too cool for his own good. Take the first line on Brighten the Corners (Matador/Capitol): "Pigs they tend to wiggle when they walk." Listen to how he blows it off, knowing full well how tenuously connected it is to the next line ("The infrastructure rots"), not to mention the one after that ("And the owners hate the jocks"). Notice the tell-tale smirk in his voice; it's the essence of his art -- cool, in a geeky anti-cool kind of way, like Bob Dylan -- or Lou Reed, whose deadpan suburban drawl Malkmus often recalls. This alone should make the average college gal at least briefly consider having his freakish little children.

Cool? It had better be, given the hit-or-miss nature of his writing. Granted, indie rockers tend to dote over Malkmus like a newborn grandchild, and not entirely without justification. He's clever, occasionally witty, and crams his lyrics full of obscure references, once in a while to other rock bands. He also gets off on raiding his record collection for odds and ends, incorporating them into his songs like a DJ too vain to buy a sampler. Wise-ass college kids groove to Pavement's suburban slack-poems for the same reason Joe Six-Pack grunts along to Bruce Springsteen's blue collar novelettes: they ring true.

So let's talk about Truth. Even the most starry-eyed, gung ho, me-and-Bono-and-rock-'n'-roll-are-gonna-change-the-world type is bound to wake up one morning from uneasy Kafka-esque dreams, crying, "Can it be> Could rock lyrics possibly lack . . . substance?

"What of Pearl Jam's Ten? the true believer will weep. "What of The Wall? What about" -- God help us -- Woodstock?" Could these cornerstones of 20th century culture be mere odes to narcissism masquerading as expressions of genuine human compassion?

"Go back to sleep," this poor soul will whimper to himself. "It's only a dream." But it's no dream. Which is why when someone comes along and howls, "Here we are, now entertain us!" -- something we can at least relate to -- we cry, "Sold!" -- just so long as it's grafted to a catchy guitar hook, because as Friedrich Nietzsche put it, It don't mean a thing if it ain't got that schving.

Malkmus and second guitarist Scott Kannberg launched Pavement in 1989 as a trio with drummer Gary Young. Their first album, 1991's Slanted and Enchanted, was greeted with huzzahs from all over the rock diaspora, as well as heaps upon heaps of hosannas from the alternative rock press. Normally discriminating listeners were hopping up and down, shouting "Epiphany! Epiphany!" over a record that sounded an awful lot like Sonic Youth fronted by Lou Reed.

After 1992's short but sweet Watery, Domestic EP and some personnel changes, the group reemerged with 1994's Crooked Rain, Crooked Rain. Quieter and more tuneful than their previous recordings, it was less intimidating to college radio programmers, and the flood of press extended to publications with much larger circulation figures than before. 1995's irritatingly indulgent Wowee Zowee was the wrench in the works: despite the mandatory write-ups, no one actually seemed to like it, and suddenly the indie darlings had overstayed their welcome.

Until now. Brighten the Corners is Pavement's most rewarding and accessible album to date, combining the jagged dissonance of Slanted with the melodic reflection of Crooked Rain. To my ears, it surpasses both.

To be sure, Joe Cool's lyrics are as inscrutable as ever, but something worth noting is how good they sound. Ever since Bob Dylan's mid-Sixties heyday, the dubious alleged compliment, "poet," has been applied to any songwriter with a stock of inlatedly high-minded literary aspirations; discarded are writers who value meter, rhyme and flow -- who write musically.

Hell, even the guy's name is kind of musical. Couldn't you picture a Hanna Barbera Pavement cartoon, with the band getting mixed up in all sorts of zany hijinks, and some stern label exec perpetually bellowing, "Malk-MUSSSSSSS!" Speaking of music (and they could solve mysteries, and have a talking rhesus monkey for a sidekick . . .), Corners is Pavement's most cohesive album to date, the group having sharply curtailed their former self-indulgence. Whether trading skewed skronks in "Stereo" or creating gentle washes in the brief instrumental, "J vs. S," their musings are concise and pointed.

They've hardly lost their experimental edge, but they've gotten subtler. Before you notice the discordantly clashing guitar lines of "Shady Lane," you'll be humming along with the chorus; just as "Blue Hawaiian" will have you singing, "The tones are grouped in clusters," whether or not you're aware that, well, the guitar tones are grouped in clusters.