Man, all music is folk music.
You ain't never heard no horse sing a song, have you?
Louis Armstrong

Louis Armstrong -- "Pops" -- always comes first in the Jazz Alphabet. "West End Blues" was to jazz what "Rock Around the Clock" was to rock 'n' roll and "The Message" was to rap: confirmation that the music had arrived. This and 24 other historic greats are collected on this essential CD. The importance of these recordings to both jazz and American music in general cannot be overstated. There were a lot of serious musicians in that wonderful orchestra of mine, and they were a little too stiff at first for Louis' taste. Finally, a fight developed between the trombonist and the bass player, and they had their coats off and were really going after each other. For the first time Louis said, "Oh, I'm gonna like this band."
Fletcher Henderson

Louis recorded this as a follow-up to the popular Louis Armstrong Plays W. C. Handy, of which critic John Swenson wrote, "On this, Louis' brilliance surprised even his most dedicated admirers." Many fans consider this album of Fats Waller tunes to be even better. This tribute to Fats Waller includes several Satchmo signature songs like "Ain't Misbehavin'," "Honeysuckle Rose" and "(What Did I Do to Be So) Black and Blue." I've never worked with nobody that even approached Louis for feeling.
And man, this is something you can't buy in a music store.
Trummy Young

All of the Reverend Satchelmouth's best-loved vocal performances, including "What a Wonderful World," "Hello, Dolly," "Mack the Knife," "A Kiss to Build a Dream On," "Gone Fishin'" (with Bing Crosby) and many others. 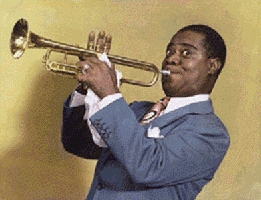 Cannonball was a pioneer of soul jazz with his singing tone and bluesy compositions. All his best cuts are collected on this CD, including "Mercy, Mercy, Mercy!" and "Country Preacher." A laid-back session with Miles Davis that many fans rank alongside Miles's own classic Fifties albums. The Best of Mose Allison
(WEA/Atlantic)

Critic John Swenson calls him "the embodiment of the cool jazzman". His laid-back vocals and smoky piano have made him a favorite of rock, blues and jazz fans alike. (He's been covered by the Who, Van Morrison, Elvis Costello and Bonnie Raitt.) This disc collects all the classics, including "Your Mind Is On Vacation (But Your Mouth Is Working Overtime)" and "Everybody Cryin' Mercy."