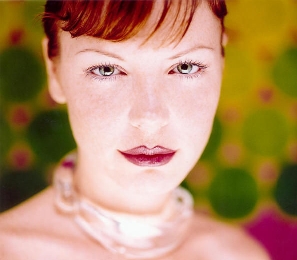 What a Little Moonlight Can Do

Cynthia Basinet has superpowers. She can walk through walls. She can leap tall buildings. She can cloud men's minds.

Do I exaggerate? Well, the last one is true, anyway.

Just listen to her sing "Tea for Two."

Vincent Youmans and Irving Caesar's "Tea for Two" may be one of the great warhorses of American popular music, but Basinet has given it a whole new lease on life, imbuing it with newfound lyricism and warmth.

"Yeah, it's so easily dismissed because it's a sweet song," Basinet says. "But no one gets the choices that were made in it. The scatting, phrasing . . ."

"And to sing a song of love and romance when you have lost your faith in it . . ."

Okay, superpowers or no, the last few years haven't been the easiest. For one thing, this single mother walked away from a successful modeling career to pursue her lifelong ambition to sing. It's been no pleasure cruise.

"It was easy to be a star so many times over in modeling or acting," she says, "but music? Took every piece of my core, focused and balanced. Because I swim each day with sharks. It is hard to sing about love and romance in a town like Hollywood."

Things are looking up, however. Her MP3.com hit, "Santa Baby," attracted the attention of Dr. Osamu Kitajima, leader of another successful MP3.com unit, the quietly eccentric Zen Zootsuit Band.

He e-mailed her and proposed adding her vocals to "Tea for Two," which had already been successful for the Zen Zootsuit Band as an instrumental.

Given the particular success Basinet has had on the Internet, this kind of Net-savvy collaboration seems perfectly appropriate, and overdubbing her vocal to the existing track posed no problem at all. "I'm a walk-in, lay it down, walk out, kinda gal," she says. "It was great because I was looking to do another song and doing a Doris Day song had been on my mind."

In fact, Day is on Basinet's short list of influences: "Because of the romance in her music and movies," she explains.

Such all-pervasive romanticism is something that the two clearly have in common. And like the underrated Ms. Day, Basinet also has a knack for distilling the best of the jazz and pop traditions in her singing.

"I actually grew up with Billie, Ella (the master), Miles, John Coltrane, Dave Brubeck, Stan Getz and bossa nova," she explains. "And I grew up emulating Hubert Laws. Even had an electrified flute. That was the first concert I went to . . . before the Grateful Dead."

She also expresses admiration for Frank Sinatra, Sarah Vaughan, Peggy Lee and Chet Baker, not to mention Patsy Cline, Teena Marie ("for her defiant voice"), Whitney Houston ("for her power"), Brian McKnight, the Jackson Five (for their joyfulness) and even Tupac Shakur. ("Because I'm a single mom and listen to him all the time through my son. Love his lyrics. Understand his pain. And wish I could've done more.")

As can be expected of someone with such a wide range of influences, jazz is hardly the only thing on Ms. Basinet's plate. She recently recorded a couple of tracks in a rock vein. Even more impressive is ""Eventually." It's a real tearjerker of a ballad, just piano and vocals, rendered with the voice of an angel, the soul of a poet, and the deepest shades of blue in the human palette.

The singer makes no secret of the fact that she poured a lot of herself into the track. The song's writers "wanted me to sing it as if it were my own song," she says, and that is exactly what she does. 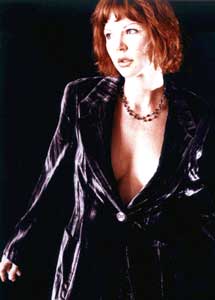 Basinet also has had the dubious distinction of being mistaken for Marilyn Monroe. That is, her highly successful MP3.com rendition of "Santa Baby" has managed to make its way into the Napster community inexplicably credited to the breathy screen legend.

Ironically, the legendary Ms. M, for all her charm, could never have achieved what Basinet has with the song. By both embodying and poking fun at the kind of stereotype Monroe wholeheartedly embraced, the performance manages to convey a very strong and secure sense of womanhood -- all the stronger to be expressed with such humor.

"The wildest part about 'Santa Baby' is that it was sung as a gift," she explains, "to the then love of my life, as were most of my songs."

In fact, Basinet bit her tongue when her relationship with that individual, an extremely well-known actor, brought her unwanted publicity, including some less than flattering comments about her burgeoning singing career.

"The tabloids made me out to be a karaoke singer," she sighs. "I had totally wanted to give him credit for his impact on my soul," she says. "But instead what we had was completely dismissed, as was my singing. And that hurt, deeply."

"But I have been singing since I was ten," she says. "And you know . . . I never had anything to prove; it just was. I knew to raise my kid first, and it will come at the right time."

"I was still overcoming stage fright in '99 right before I launched the music on the Internet," she recently told The Loft. "It's one thing to be hired [as a model] in a music video, and it's one thing to walk around always singing to myself. But putting them together meant overcoming some pretty major obstacles."

It meant expressing what was inside of her, as opposed to the more superficial emphasis of modeling. "It's easy to look the look," she adds. "But defy the look?"

Make no mistake -- this singer/actress/writer/activist/single mom is going to be defying all kinds of expectations in the years ahead. She's already been a hit on the World Wide Web ("I could be the Perry Como of the Internet," she declares, tongue firmly in cheek), and other media will no doubt soon succumb to her charms.*

Her MP3 recordings are only the beginning, but they are proof positive that Cynthia Basinet is ready to call her own tune.

Back to Feature Articles